April 30th, Italian legendary Speed/thrash metallers CELTIC HILLS released their new epic video for ‘The Blood Is Not Water’, taken from their forthcoming album ‘Mystai Keltoy’, coming out on May 15th 2021 via Elevate Records!

“Mystai Keltoy” is an enigmatic name that alludes to the Elusian Mysteries. The album includes 11 tracks that speak of ancient alien civilizations, European pyramids, legends and historical facts of Friuli, as you could already guess from the album cover. The album was recorded and produced at the Groove Factory in Udine by Michele Guaitoli, a prominent name for being the lead singer of Temperance, Vision of Atlantis, Era. Among the 11 songs one is sung by Germana Noage, ex singer of Aetherna and of the same Elevate Records team.

The formation of the power trio is Simone Cescutti on drums, Jacopo Novello on bass and Jonathan Vanderbilt on vocals and guitars. The cover is hand painted by Sheila Franco, the same girl who painted Blood Over Intents, and represents the myth of the ancient visitors. Jonathan Vanderbilt played and recorded the album with Panico Custom instruments, the Italian sponsor of custom lutherie of Luca Panico di Ravenna, a guitar specially created with the specifications requested by the Canadian guitarist. 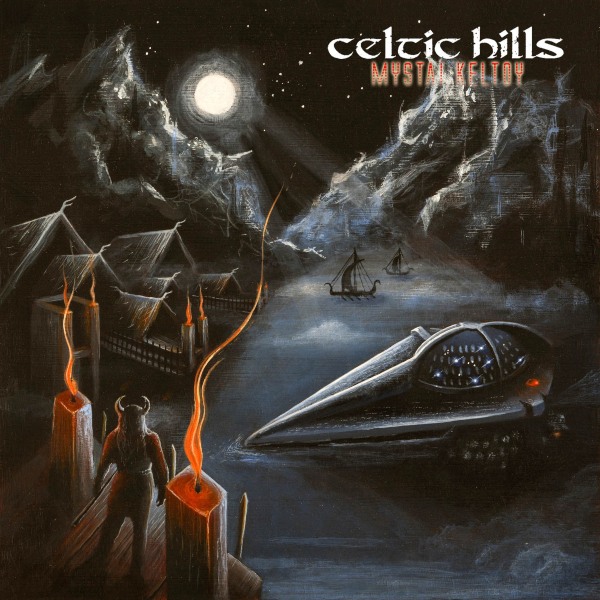 “Mystai Keltoy” Tracklist:
The Light
Blood is not water
The tommorrow of our sons
The 7 heads dragon of Osoppo
Landing of the Gods
Already lost
Falling stars
Battle of Frigidum
Eden (sung by Germana Noage)
Temple of love
Alliteratio (sung in Italian)

CELTIC HILLS were born in 2010, but only in 2020 they sign a recording contract with Elevate Records with which they release the album “Blood over Intents” and the EP “Schrage Musik” both in 2020.
In 2021 another album is out “Mystai Keltoy” produced and recorded by Michele Guaitoli singer of Temperance, Vision of Atlantis and Era. The style played is difficult to place in a single vein of metal, as there are many influences ranging from death to power, with sound elements that can also recall a certain type of 90’s thrash. The singing is quite varied, and for some listeners it may seem unusual in a metal band. power, speed and good melodic lines distinguish the band from others. Between 2010 and 2020 they released “Horns helmet fighters” and for the Slovak Music Globalliance they came out on international compilations on volumes 2,3,4.

Over the course of a year, the band has had a handful of  gigs thanks to a home demo, started collaboration with the booking company UNDERGROUND.  The […]

The Dutch Thrash Death Metal Band Black Rabbit released their brand new single ‘Taken By The Devil’ on the 17th of October 2020. They will bring […]

Dear friends and fans good evening! On Sunday the 22nd of November at 17:00 we will be premiering our very first […]

The track is taken from the band’s upcoming album “Clepsydra: Time against Infinity”, out on October 2, 2020 via ROAR! Rock Of […]