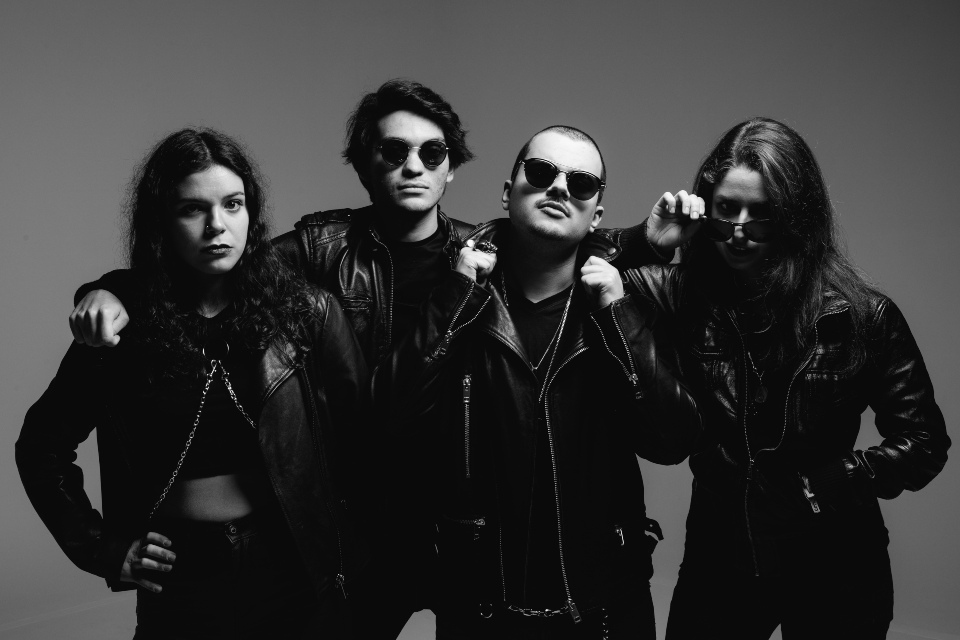 London based metallers JASON PAYNE & THE BLACK LEATHER RIDERS have revealed the second teaser for their upcoming video ‘The Dark’, available on all major platforms on June 4th.

Jason Payne reveals more details on the video:
“We’re just three weeks away from the release of our next single – The Dark. It will be part of our upcoming EP – “The Abyss”; and we’re pleased to be releasing new music. We have worked several months on these six tracks and we’re ready to put them out. Save the date – 4th of June (2021). Stay safe, stay tuned and stay metal.”

Earlier this month Jason revealed:
“I’m very pleased to announce that our new video “The Dark”, which will be released on the 4th of June (2021), across all major platforms.
This song talks about death, obscurity and the “nothing”. It’s about feeling confused and betrayed, and someone that’s losing his essence. Without a consciousness, and with no purpose in our lives, we’re just a bunch of roamers taking a road to the abyss, and that leads us to the dark and lashes us to insignificant beings floating in “the nothing”.
Can’t wait for its release!”

Read what Jason has to say:
“The Dark is a song that sums up the theme of this EP, “The Abyss”. It’s about death, obscurity and the “nothing”. It talks of things like trying to reach to the void, feeling confused and betrayed, and about a person that’s losing his essence. Without a consciousness, and with no purpose in our lives, we’re just a bunch of roamers taking a road to the abyss, and that leads us to the dark and lashes us to insignificant beings floating in “the nothing”.
When I was writing this EP, I got affected by the outside world. It’s a dark period that we’re living. I caught the essence and the feelings that this time put me through and made a whole EP about existentialism and nihilism. This period made me question who am I, what’s my purpose, what have I done with my life and what if this all ends now? Would it matter? Do we matter? Does life matters? Of course, it does! In my opinion, there’s no point of doing anything or living if this doesn’t matter. However, when I wrote this EP, I don’t give you the bright side of the story. That’s for the fans to find out. My whole point with this work is to make people question their lives and feel these emotions. This record means so much to me, since it’s about everything I felt and still feel. I’m a person who never stops asking questions. I always want to know more. Specially, when it comes to existentialism, I’m always in internal conflict, since I question everything. This is my message, this is my music and it’s about how I feel, and hopefully, people will relate to it.”

Jason stated:
“It has been too long since I’ve played a show. We’re so excited to be back on stage! I know it’s gonna be a great moment for us and for the fans!”

With a history boasting over 300,000 streams, 50 live shows and a modest lifetime of musical creation with past acts, London based metal artist Jason Payne has taken 2020 to embark on a new journey; JASON PAYNE & THE BLACK LEATHER RIDERS. A culmination and reincarnation of his strongest rock compositions, with numerous releases ready and waiting taking influence from the likes of Slash, Avenged Sevenfold, Linkin Park, Korn, and many other legendary over the years. Think big riffs, impactful grit-laden vocals, and an energy just screaming to be invited to the live stage.

Adelaide based metal combo Shatter Brain are proud to present their new amazing video for “Lorem Ipsum”, track taken from “Pitchfork Justice” out via Wormholedeath / The Orchard […]

The track is taken from the band’s upcoming fourth, full-length album “Phase IV Genocide”, out on December 11, 2020 via ROAR! […]