GENTLE SAVAGE have revealed the teaser of the upcoming official video ‘Carry The Fire’, taken from their debut album “Midnight Waylay”.

Just recently the band released the Trilogy of “Midnight Waylay” album. Presented by lead vocalist and songwriter Tornado Bearstone the Trilogy gives you insights to what’s behind the songs and the stories. In case you missed them, watch below.

“Midnight Waylay” is available for streaming on all major platforms, at this location. https://songwhip.com/gentlesavage/midnight-waylay 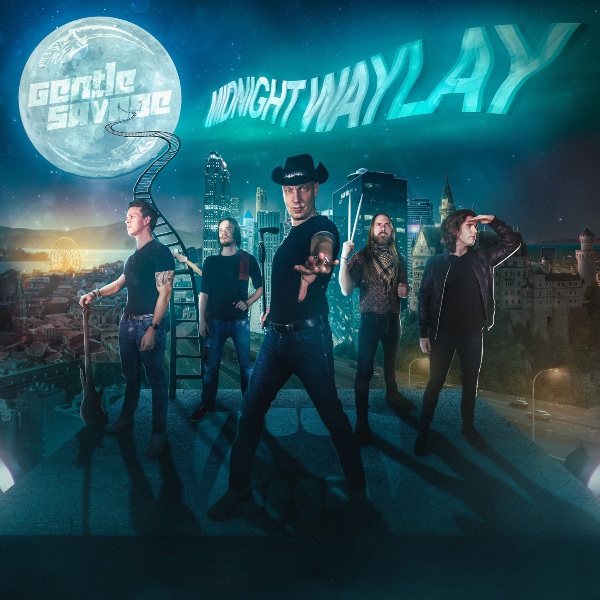 Tornado on “Midnight Waylay” album: “Midnight Waylay depicts a ‘taking it easy in the daytime, turning into a beast at night’ kind of lifestyle. Just like a hunter strikes from the shadows, ruthless and silent, these songs can without warning rock your world. As a concept the album Midnight Waylay is best appreciated when served whole, but each song has its own character and works well independently. Find your own adventure, let yourself loose!”

Buy the album at https://gentlesavage1.bandcamp.com

Tornado stated on the album coverart:
“TWO SIDES TO EVERY STORY
Isn’t it strange that when you get something really big done you are at the same time relieved and a bit confused?! That’s how it feels like right now.
The cover art was created by our friend, graphic art wizard Vin Valentino. Vin and vocalist Tornado created the Midnight Waylay world based on Tornado’s visions of a Rock Band descending down to earth using a ‘stairway to heaven’. That’s Tornado’s way of showing his gratitude to the old great ones who showed the Rock’n Roll way for latter generations to roll. ”

“It is all about the songs. And their internal message. That’s the basic philosophy behind Gentle Savage.”

’Treat yourself and let our magic in. We’ll take care of the rest’.

In celebration of their phenomenal sophomore album LIGHT SWITCH turning 1, as well as being nominated for BEST LIVE ACT and BEST […]